Review of Hamlet, Prince of Denmark: A Novel [Audiobook] 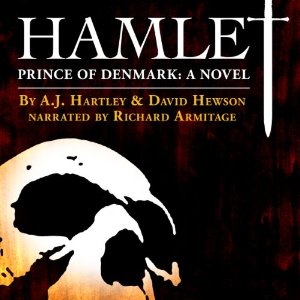 I just finished listening to Hamlet, Prince of Denmark: A Novel, written by A. J. Hartley and David Hewson, and narrated by Richard Armitage. It's surprisingly well-written and, of course, magnificently performed by Armitage.

You'd think that Hamlet would be done to death by now, but these writers managed to bring something fresh and very engaging to the table. Hamlet, although definitely still a brooding character, feels a lot less like a navel-gazer and a lot more like a caged lion, brooding only because he has not yet figured out how to sink his teeth into his prey. Every character is well-drawn, including the clever new device of expanding Yorick into a main character with often-hilarious, biting dialogue. By the time the final scene occurred, bathed in blood as usual, I was twisted up inside with all of the individual characters' desperations and I could see the whole thing happening not as some giant farcical tragedy but as a set of unavoidable forces all crashing into each other, each person hurting inside and out.

Armitage's beautiful voice and excellent acting can redeem even a story as tedious as A Convenient Marriage, but thankfully he had such good subject matter to work with here that the dark richness of his natural tone is the perfect means to convey the inner workings of an ancient castle and the simmering hatred of a wronged prince. Armitage slipped easily from accent to accent, high-born and low-born, native and foreigner, male and female, comic and tragic, old and young. It was often easy to forget that one man was speaking all the lines, and instead I saw a young woman or an old lord in my mind's eye without the slightest effort.

If you haven't listened to this audiobook--even if you normally don't listen to audiobooks--you should go listen to this one.

Hamlet, Prince of Denmark: A Novel is well worth your time.